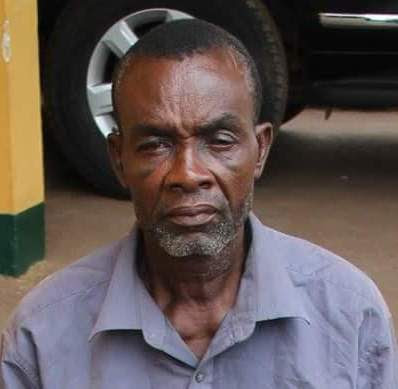 On that fateful day, Igwe invited 35-year-old Ijeoma, to his home located at 22, Obohia road, Aba. When she arrived about 10.30am, he calmly went into his bedroom, pulled out his pump action rifle and shot her dead.
Speaking to Sunday Sun, the Commissioner of Police, Mr. Adeleye Oyebade said the suspect had been in a romantic relationship with the deceased since 2013. When she became pregnant, they agreed that she would abort the pregnancy.

Igwe claimed to have given the deceased over N600,000 for her upkeep on the understanding that she would abort the pregnancy. "The deceased Ijeoma Chibuzo was my girlfriend. We started dating in 2013. I didn’t know that she was married. In the course of our relationship she became pregnant, but we agreed that she would abort the pregnancy.
I gave her N600,000 for the abortion and for her upkeep. "Not long after she came back and took N200,000 and another N400,000, because of the pregnancy. I even had to sell my house worth more than N1million, all to appease her to abort the pregnancy. Then I realized that she was just defrauding me because of the pregnancy. "When I was tired of the issue of Ijeoma using the pregnancy to blackmail me, I decided to invite her to my house when she demanded another N600,000.
She came around 10:30am on July 9, 2017. Immediately she arrived, I went inside my bedroom, picked one of my pump-action rifles and shot her dead." Igwe, who disclosed that he is married and has children, also said that he had a licence for the pump action rifle.
Oyebade confirmed that the deceased was also married, added that the husband Onuoha Chibuzo, was invited to the police station by phone, and he identified her as his wife, before the corpse was taken to the mortuary.
Oyebade assured that the suspect would be arraigned in court following completion of investigation and the case diligently prosecuted.
Posted by Ogugua Obidike at 08:09