I Was Dethroned Because I Refused To Have Sex With The Director! All The Details As Miss United Nations Nigeria 2013 Speaks 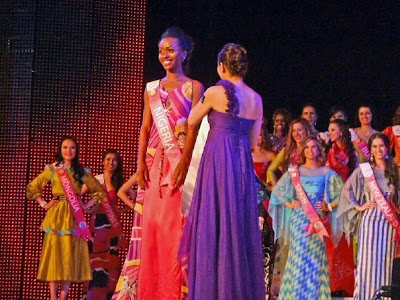 Miss Makbere granted an exclusive interview with mienpamo where she said it all.

Why were you dethroned?

It all started when I got the Franchise for participation at the Miss United Nations Pageant on the 17th to 18th of April 2013.
Because I was getting late for everything, they immediately forwarded my invitation letter and other documents to facilitate my VISA application. In addition, they assigned to me an African Director whose job was to make sure I secure a Tourist Visa to Mexico were the finals would take place. I had all his details sent to me and I contacted him and we started working.
First he sent me Embassy requirements which I met but one thing never went well with me. And that was the Exaggeration of the visa fee from 30pounds to 700USD for each person and for 3 people, that would be #280,000 in Nigerian Currency, and I was to travel with my chaperone and personal director.
I paid him the sum of #70,000 for a start before he went ahead with the procession of visa.
Some days after we were invited for Biometrics and on getting there we also made another payment of 30,000. We got the Visa and promised to pay up when we return to Yenagoa.

Continuation of the Reply…
I am aware that this Pageant is by the acclaimed nomenclature under auspices of the United Nations, which has as one of it’s Articles, the need for every individual to have the Right to respect, for the dignity inherent in him/her human persons and to the recognition of higher Legal Status. All forms of exploitation and degradation of men(women inclusive) particularly slavery, slave trade, torture, cruel, inhuman or degrading punishment and treatment shall be prohibited.
No doubt, the African Charter and the Present Nigerian constitution have adopted the foregoing piece of Legislation.
Therefore, my dethronement based on complaint founded as the above without Fair hearing to me indicates fundamentally that you are all Co-conspirators in the said plot. And one is inevitably carrying the conclusion that those who are drafted to replace me and deprive me of my self-attained franchise for the contest are all reasonably suspected to be tainted with having Compromised their Dignity.
Accordingly, I have no Doubts based on the Foregoing, that the would-be Miss United Nations and Candidates or Contestants Submitted to the INDIGNIFYING Amorous Acts.
I will forever stand to oppose those Agents and Media of this Obnoxious Acts.
I don’t see why Bayelsans and Nigerians would want to have anything to do with you, Mr Zelly Mighty.
Posted by Ogugua Obidike at 09:29