Customs uncovers another container-load of arms in Lagos port 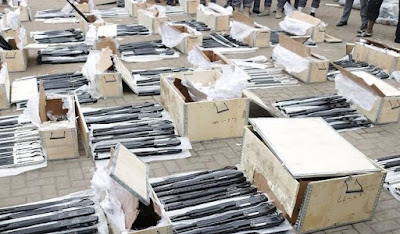 The Nigeria Customs Service, Tin Can Island command on Tuesday intercepted a container laden with 440 arms and
ammunition of various sizes and designs.
Speaking during the seizure, the zonal commander, Tin can Island command, Monday Abue, who represented the Comptroller General, said that the cargo was shipped from Turkey.
He said that the consignment was declared as Plaster of Paris by the importer.
He explained that the container with registration number PONU 210024/1, was picked up based on intelligence report adding that investigations were ongoing to unmask the importer.
According to him, the pump action rifles were manufactured in the United States of America and Italy.
He said, “they are pump action rifles of various designs and also the single barrel device that you are familiar with.

“Based on intelligence report, Controller Bashar identified and intercepted the container.
“We discovered that they used POP to conceal the importation.
“We have arrested one defendant but due to security reasons, we don’t want to make it public for now because such information could hamper investigations which are still ongoing.”
According to the ACG, the nation had been saved from another round of problem that the rifles would have caused.
The PRO of the command, Uche Eiesieme, in a statement issued after he listed the rifles seized as 100 pieces of black tornado single barrel rifles, 75 pieces of silver magnum single barrel rifles, 50 pieces of altar pump action rifles, 215 pieces of black single barrel rifles among other accessories.
The development is coming after a similar seizure of 661 pump action rifles early in the year by the NCS Federal Operations Unit, Zone, A’ Ikeja along Mile 2-Apapa road.
The rifles according to the Comptroller General of NCS, col. Hameed Ali(Rtd), were imported from Turkey and routed through the Apapa port.
Meanwhile, Sifax Group, owners of Ports and Cargoes Handling Services limited, have refuted the report carried by several online news media that the seizure was made inside the Ports and cargo terminal.
The rebuttal was communicated to our correspondent on the telephone by the Corporate Affairs Manager, Sifax Group, Olumuyiwa Akande.