How We Kidnapped Kids from Churches - Confession of a Suspect (Pictured) 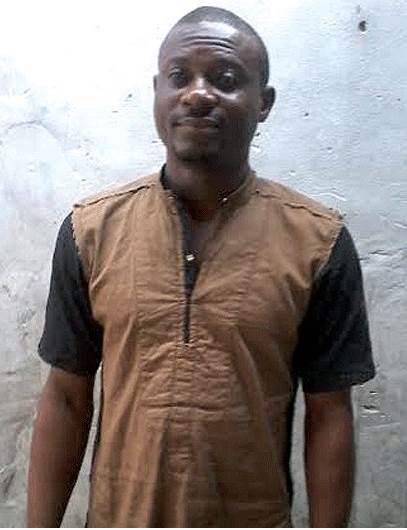 A 26 year old father of one, Gabriel Ogunsawe,  who has successfully specialized in kidnapping little children from church, is currently cooling off in one of the dreaded cells at the State Criminal Intelligence and Investigations Department, SCIID, Panti, Yaba, Lagos.
Before his arrest, he had participated in three different kidnappings of children.
He stated that his first operation was successful but luck ran out on him on his second attempt.
He was arrested, arraigned in court and remanded in Kirikiri prisons for about a year. But no sooner than he got his freedom, he took to the same crime again, he was never twice lucky.

Speaking to Crime Guard, Ogunsawe said:
“I am from Ijebu-Ode in Ogun State.  I am a National Diploma, Accounting student of Lagos State Polytechnic. I was arrested because I was involved in the kidnap of a young child of about four years from Amazing Grace Church in Palm groove area. I was introduced into kidnapping business by a friend called Olayinka.
I have known him for over six years.   It was Olayinka who came up with the kidnapping idea.   My role was to collect the ransom from the parents of the victim. This is not the first time we have engaged in kidnapping of little children.   In fact, I have engaged in three kidnappings.   The first one was successful while the last two were not.
I was arrested after the second kidnapping while attempting to cash the ransom at the bank but my friend Olayinka, escaped. I was in Kirikiri for almost a year before I was released. When I returned from prison, I was jobless when Olayinka came and lured me into it again.
Their mode of operation
“Normally,  Olayinka goes into any church of his choice on Sunday morning, sits like a member inside the church and monitors the activities and movement of worshippers in the church.   When he is certain that he can lure a child out of the church premises unnoticed,  he quickly lures the child with biscuit or toys.  After successfully abducting the victims, he takes them to another big church located very far from the church where the children were kidnapped.
We never killed or sold any child. We only keep the child for a day and ensure we get whatsoever ransom we need to get from the victim’s parents.   We ensure that we get the ransom first thing on Monday morning before the child will be seen. He abandons a large envelope addressed to the pastor in the church with a phone number. Once they contact us through the number,   we send  bank details to the parents of the victim.
“The first kidnap operation was in a Redeemed Christian Church in Shomolu area and it was successful.   We were paid N300,000 but Olayinka gave me N70,000 only, as he said we incurred some expenses, that was why he took the larger sum. Unfortunately,  the second operation was unsuccessful as I was arrested, arraigned in court and remanded in prison from June 2013 to January 10 2014.
Honestly,  I didn’t need anyone to tell me to stay away from crime after my release from the prison but I didn’t have a choice.   When I was released, I started squatting with my cousin, Akorede, in Akilo Street close to Lady-Lak area.  That was after I was ejected from the rented apartment where I lived because I was unable to pay the rent. My wife and son had to go live with her parents in Ota.
This last operation, Olayinka initially, asked the victim’s parents to pay N700,000 but, they said they will pay N250,000.   They later sent N3,000 airtime to Olayinka.   He transferred N1,500 to my line the next day after I confronted him for collecting the ransom behind me. Because I was broke, I transferred N750 to my cousin Akorede, who I was squatting with.
We used an old registered line of mine for the transaction.   It was that line that he used to transfer the air time to my main line.  It was through the transferred airtime that Akorede was arrested,  unknown to me. It was through his sister, Jumoke,  that   I was eventually arrested while I was sharing handbill.   Akorede and his sister Jumoke,  are innocent and know nothing about the kidnap.
I have a son who is about three years seven months old and I won’t want him to be kidnapped because I know the trauma we subject the families to when we kidnap their children. There was a time when I had to speak with the mother of the child we kidnapped.  I could feel her pain and broken heart from her voice.
My wife doesn’t know that I am into kidnapping business. My mum is late but my father is alive.  He doesn’t care.  I am married and I am a tiler. To my wife, I am very sorry to put you through all this shame and disappointment. My family members are all disappointed.   No one has come to see me since I was arrested.  Right now, I feel so bad about my actions, but I was so desperate to get out my unpleasant situation,” he stated.
Posted by Ogugua Obidike at 08:10