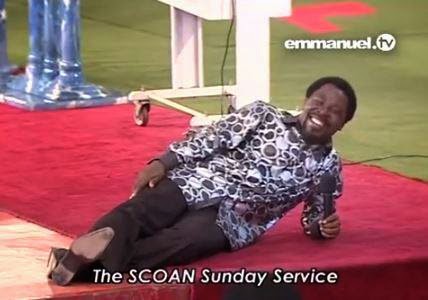 3 survivors of the deadly Abuja bomb blast that killed over 70 people, yesterday narrated their divine deliverance during service at Prophet TB Joshua's church, The Synagogue Church Of All Nations (SCOAN) in Lagos. And according to them, because they had the prophet's anointing sticker/water on them when the blast occurred, they were saved.


Read their testimonies after the cut. They were shared on the church's Facebook page.
SAVED FROM BOMB BLAST
Mr. Egbe Candidus from Benue but residing in Abuja, Nigeria, came to testify of how God saved him from a fatal bomb blast that claimed many lives in the capital city recently.

On the fateful day, after his bath in the morning, he ministered the Anointing Water on himself as was his tradition. Fortified, he placed the bottle of the Anointing water and the Anointing Sticker in his pocket and left for Abuja.

When he got to a place, his vehicle slowed down due to heavy traffic. From nowhere, he heard a deafening big bang that sounded like the area had been hit by a huge earthquake. It was a bomb blast. Before he knew it, his car was tossed into the air above human height due to the impact. When the car landed on the ground, the glasses had been shattered. He found himself thrown outside the car but landed safely and unhurt. Around him, he saw scores of dead bodies lying on the ground. Limbs of people were strewn everywhere. When he got up, he could not believe he was still alive. He felt his pockets and discovered his armour, the Anointing Water and Sticker, were intact. God had rescued him.

GOD’S ARMOUR PROTECTED ME FROM BOMB BLAST
Evangelist Maria Ajekukor was on her way to work one morning, when she suddenly realized that she had left the house without her Anointing Sticker. She quickly rushed back to get it, as she never went anywhere without it. She reached the expressway to the nearest bus stop.

When her bus came, she realized that she did not have enough money, so the bus continued without her. Another bus came and still, she did not have the correct change so she did not enter. Buses continued to come to that bus stop and she continued not to enter when suddenly, she heard a loud blast. There was a bomb blast, and everyone was running in all directions. The police were warning people to stay away from people carrying bags.

At a closer look, she discovered that the very bus she was about to enter, had been hit by the explosion. She saw dead bodies scattered everywhere and limbs that had been removed from people’s bodies as a result of the blast, lying on the ground. The bomb blast was so strong, that one mother who was carrying her baby, was thrown to the ground and the baby tossed in another direction. She stood shedding tears, as she was completely shocked at the horrific incident and at the same time, grateful for being sheltered under God’s protecting hands through the medium of the Anointing Sticker.

ESCAPED DEATH THROUGH THE ANOINTING WATER
What started like a normal day in the life of Pastor Damfa Adams from Righteousness Covenant Church, suddenly turned to horror when he almost lost his life through a bomb blast in Abuja.

He was on his way to the bank to collect his ATM card, not knowing the danger that lay ahead. Earlier that day, he had ministered the Anointing Water, asking God to protect him. As he went to get his bus, he heard a big bang - a bomb blast had erupted where many people were injured and lives lost. A splinter of glass flew into his eye which would ordinarily have blinded him. Due to the impact of the noise, he lost his sense of hearing.

He remembered his weapon – a bottle of the Anointing Water. He ministered it on himself and immediately, his hearing returned!
Posted by Ogugua Obidike at 21:57