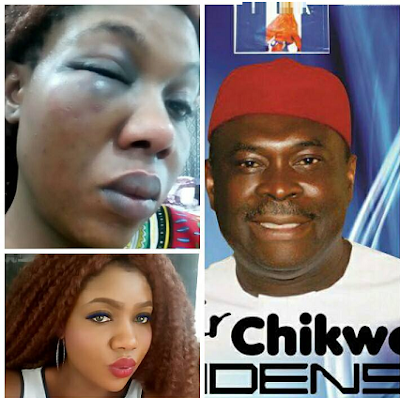 Former ALGON national chairman and PPA gubernatorial candidate for Abia state 2015 Chief Chikwe Udensi has been accused of domestic violence. A facebook user Irene Amos Abbott, shared disturbing photos of Udensi’s wife Dinma Udensi, who she claims she is her aunt after she was brutally physically abused by her husband.    She accused him of being a womaniser, a violent abuser, arrogant and almost heartless. She claims that his wife Dinma has asked for divorce but the Chief has refused to bulge because granting her a divorce would dent his image.

“It started as normal couple arguments then slaps to minor beatings, and now major beating to the extent of almost disfiguring her. She has tried to endure but it's getting worse each day so No she will no longer stay in this marriage and die. NO WAY!!!
She has asked for divorce and he beats the hell out of her for bringing it up, because it'll dent the image he has made society believe of him, she's currently under lock and keys and he's not letting her go out.
She sent out an SOS and has asked that her story be made public.
He's very influential with the police force so it's almost impossible to rely on them. He constantly threatens to kill her or take away her kids if she sneaks away.
She has tried to leave many times but security is tight.
She's terrified of him and is a shadow of herself but after years of domestic violence she has become bold enough to go public about it.
If nothing is done, God forbid her corpse is the next we'll see!
This isn't the first, second or third time, it has been happening and she's had so many hospital visits to treat the injuries inflicted on her by him.
Chikwe Udensi is a womaniser, a violent abuser, arrogant and almost heartless.
I'm calling on human rights activists, lawyers and just anyone that can help fight free this woman, No one deserves to die in marriage NOBODY!”
Posted by Ogugua Obidike at 19:41