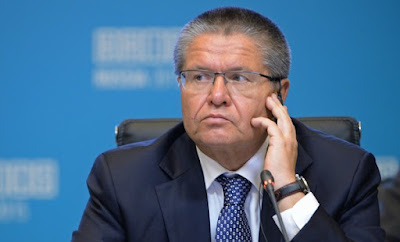 Russia’s economic development minister has been arrested in a surprise night-time swoop, accused of taking a $2m (£1.6m) cash bribe as part of a sting operation.
Alexei Ulyukayev is the highest ranking government official to be arrested since a failed coup in 1991, and the move is seen by many observers as part of a battle between differing Kremlin factions taking place behind closed doors.

Ulyukayev has held his ministerial post since 2013, having worked in government since 2000. He is known as part of the government’s liberal wing and has spoken out against increasing state involvement in the economy.
Ostensibly, Ulyukayev received a $2m bribe for giving the green light to the takeover of oil company Bashneft by the state oil giant Rosneft, which is headed by Igor Sechin, a hardliner and one of the most powerful men in Russia.
Pro-Russia presidential candidates tipped to win in Bulgaria and Moldova
The government put 50.1% of Bashneft on the market earlier this year, but Rosneft’s bid for the producer was criticised by businesspeople and the more liberal wing of the government, including Ulyukayev, who said the state should not take part in privatisation. When the bidding was finally held last month, Rosneft won the tender with a $5bn bid.
Russia’s investigative committee said the investigation did not cast doubt on the legality of Rosneft’s bid for Bashneft. The committee said agents of the FSB security services were involved in the deal, as a sting operation, from the beginning.
The bribe was allegedly paid to to Ulyukayev, in cash, on Monday. The investigative committee spokeswoman Svetlana Petrenko told RIA Novosti news agency: “This is about extortion of a bribe from Rosneft representatives accompanied by threats … Ulyukayev was caught red-handed as he received a bribe.”
President Vladimir Putin had been aware of the investigation into Ulyukayev for some time, his spokesman, Dmitry Peskov, said.
Putin has long spoken about the fight against corruption as a top priority of his rule, but critics say corruption is widespread at the highest levels of government, and most observers believe high-profile investigations and arrests are motivated by infighting and a battle for control among different clans, rather than a simple fight against graft.
Russian agencies said on Tuesday morning that Ulyukayev was being questioned by the investigative committee. He was expected to appear in court later in the day, where he would be formally charged, and the court would decide whether to place him in pre-trial detention or release him on bail.
Posted by Ogugua Obidike at 15:12