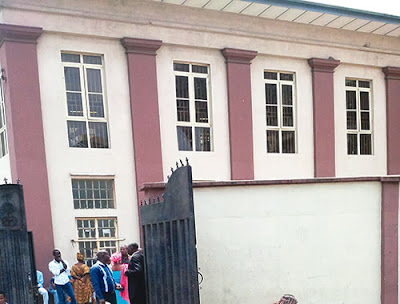 A  28-year-old marketer with Diamond Bank Plc, Okota branch, Lagos, who reportedly fled with a sum of N309,000 belonging to his bank customers has been arrested.
The suspect named Isiaka Abiodun was contracted by the bank from Strategic Outsourcing Limited in 2013.
He had collected the monies as deposits from one Mrs. Nneka Eze, a trader in Lekki, and two others,
identified only as Ebulu and Chidera.
PUNCH Metro, however, gathered that only Eze, whose deposit was N300,000, had approached the bank on the alleged fraud.

Their correspondent was told that the 28-year-old suspect had obtained the sum from the traders sometime in July 2015, but disappeared from the bank in November, when the fraud was discovered.
The bank was said to have reported the crime to the company through which Abiodun was employed. It was learnt that the chief security officer of the firm consequently reported the case at the Ajah Police Division.
The police said the suspect was later tracked down to his house on March 7, 2016.
But in his statement to the police, Abiodun said he used the money to pay the medical bill of his mother who had a stroke. He said he intended to refund the money piecemeal from his salaries, adding that he had repaid N50,000.
He said:
“I am a contract worker with the bank and I have been working there for three years. It is true that I collected N309,000 from the bank customers. But I used the money to treat my mother who had a stroke. I travelled in November to attend to her. I have paid N50,000 to the bank. I intend to pay the balance in instalment from my salary.”
A police prosecutor, Inspector I. Okeke, brought the suspect before a Tinubu Magistrate’s Court on Monday on one count of stealing.
Okeke told the court that the defendant had confessed to the offence, which is punishable under Section 285 (7) of the Criminal Law of Lagos State, 2011.
The accused, however, pleaded not guilty to the count and elected summary trial. He was granted bail by the presiding magistrate, Mr. A. Adefulire, in the sum of N400,000 with two sureties in like sum.
The case was adjourned till April 20, 2016.
Posted by Ogugua Obidike at 07:26