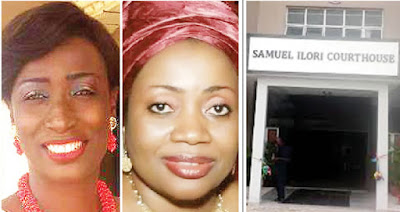 A Lagos magistrate, Mrs. Funke Sule-Amzat, has been accused of abuse of power for allegedly sending a mother of three, Yetunde  Osijo, to the Kirikiri Prison.
But the Lagos State Government defended the magistrate, saying Osijo drove in a reckless manner and caused a breach of the peace.
It was gathered that Osijo’s car had scratched the magistrate’s Toyota Corrolla on Monday at the Ogudu end of the Oworonshoki Expressway.
The magistrate was alleged to have chased her to the Third Mainland Bridge area, where she ordered her arrest and subsequent arraignment.

Osijo, who had no legal representation, was said to have been remanded in the Kirikiri Prison after she could not meet her bail condition of N100,000, with one surety in like sum.
An Instagram user, @steel_member, who gave a blow-by-blow account of Osijo’s ordeal, said Osijo was taking her child to the hospital when the incident happened.
In the first post on Monday, he said,
“Magistrate Sule-Amzat has just ordered that Yetunde Osijo be locked up in the Kirikiri Prison for scratching her car earlier today.
“However, it was the magistrate’s driver that was liable. At the time when the minor accident occurred, Osijo assumed she was asked to leave, only to realise that Sule-Amzat’s car was chasing her car.
“She stopped her car and the magistrate ordered that she be detained. She was today tried without a lawyer representing her at the court, and without the presence of the driver of the magistrate in court. In a speedy development, she was taken to Kirikiri in a Black Maria.
“She is a mother of three-year-old twin boys, and she was on her way with one of them to the hospital. Fellow Nigerians, please let us not allow the magistrate to abuse her office by detaining Osijo in Kirikiri. She is not a criminal. Let us not allow Osijo sleep in Kirikiri or in any jail. Say no to misuse of power and unlawful detention.”
On Tuesday, the Instagram user alleged that the police had forcefully taken over his phone and deleted some recordings, adding that Osijo was still in detention.
He said, “This is the second day and Osijo is still being unlawfully detained at the Kirikiri Prison on the orders of magistrate Sule-Amzat’s magistrate friend, Elias of Samuel Ilori Court House, Ogba, Lagos, at 5.30pm yesterday (Monday).
“Sule-Amzat is a magistrate at Ogudu in the Kosofe Local Council Development Area. Pictures and recordings taken at the scene were deleted by the police.
“She (Osijo) was rounded up by men of the Rapid Response Squad and taken away. This is about a scratch on magistrate Sule-Amzat’s car in a traffic tussle. Osijo was denied right to a counsel and the driver of the magistrate’s car was not even in court. Her car has also been impounded.”
PUNCH Metro learnt that the victim was able to perfect her bail on Tuesday and was released by the Chief Magistrate of Court 4, Ogba,  Mr. A. Elias, under whose jurisdiction the accident occurred.
However, Lagos State Government in a statement on Wednesday said there was no truth in the allegation, adding that the magistrate denied abusing her power.
The statement, signed by the Chief Registrar of the Lagos State High Court, Gbenga Ogundare, said the matter would have been resolved amicably, but Osijo boasted of being connected with the powers that be.
It read in part, “On Monday, March 21, 2016, around 9am on her way to work, close to Abiola Gardens, Ojota, a car brushed Mrs. Funke Sule-Amzat’s car from behind.  The magistrate’s driver alighted from the car and Yetunde Osijo, who drove the car, rained abuses on the driver and his boss.  The magistrate stepped out to see the extent of the damage only for Yetunde Osijo to speed off in a dangerous manner.  She was eventually arrested by men of the RRS at Teslim Balogun Stadium, Surulere, and taken to Area H Police Command, Ogba.
“The Area Commander made an attempt to resolve the matter but Yetunde Osijo insisted on calling her husband who came in and became very boastful.
“The true position is that the magistrate, upon the occurrence of the incident, lodged a report with the police, who effected an arrest, and upon investigation, arraigned the suspect before the Chief Magistrate’s Court, Ogba presided over by Mr. T.A. Elias.  She was immediately admitted to bail in liberal terms and the matter was adjourned for mention.“The suspect was never arraigned before the complainant, Mrs. Funke Sule-Amzat, and she made no order or took any step in respect of the matter. The matter is presently pending before the court for determination.”
Punch
Posted by Ogugua Obidike at 06:04