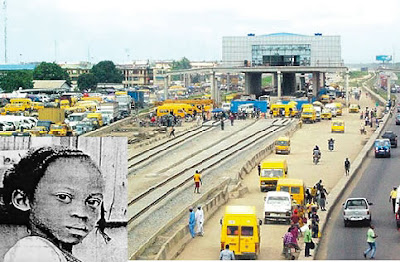 A six-year-old schoolgirl, Oluwajuwon Akinsanya, has been abducted by unidentified persons at the Ojo Military Cantonment, Lagos.
The primary one pupil of Maryam Bliss International School, Ojo, was said to be sleeping in the room with her parents in Block II, Flat 5, Engineer Quarters, when she was whisked away by the abductors.

PUNCH Metro learnt that the men also stole the phone, money and recharge cards (vouchers) of the victim’s parents.Her mother, Yetunde, told our correspondent that the family had yet to be contacted by the abductors since the incident happened in January.
She stated that she had visited more than 200 places seeking help, adding that she was sexually harassed in one of the religious houses she visited.
Yetunde said,
“On January 20, 2016, around 4.30am, while we were asleep, I suddenly heard a loud noise and I woke up.
“I checked the floor where my daughter normally slept, but I didn’t see her. Her younger brother, Enoch, was on the bed with my husband and I. I thought she went to the toilet to urinate.
“However, when I checked the place, I didn’t find her. It was when I got to the kitchen and met the door opened that I knew intruders had come in. They came in from the kitchen.“They took my bag and removed all the money there. They also emptied my purse where I kept the recharge cards I sold to people. My husband’s phone was equally taken away.”
She said she reported the matter to the Ojo Barracks Military Police and the victim’s father was arrested. She said the military authorities said her husband was the first suspect.He was, however, later released and three other suspects arrested.
The suspects – Mercy Akere, Ayodeji Akinsanya and Segun Akinsanya –were alleged to have been accused by Yetunde of issuing threats against her family.
Our correspondent gathered that the military later released the suspects, saying there was no evidence against them.Yetunde, a trader, said a member of her husband’s family took her to an orthodox church for help.She alleged that the pastor after giving her a fake prophecy of her daughter’s whereabouts, sexually harassed her.
“I complained to my in-law who took me to his church, and he called the pastor in my presence to challenge him.
“The pastor told him on the telephone that he only used a candle to rub my breasts because that was what my child sucked; and my private parts, because that was where she came out from. He said he did it so that the deliverance would be quicker,” she said.
Oluwajuwon’s mother, who expressed dissatisfaction at the way the military were handling the case, said she asked for a transfer to a civilian police station, but the Officer-in-Charge, Major Obot, refused.
When contacted, Major Obot declined comment, saying he was not authorised to speak with PUNCH Metro.
“I am not the right person to talk about the case. The child’s father is a military officer and the case is being handled by the military because it happened in the barracks,” he said.
The victim’s father, Sunday, a sergeant, said he did not suspect his relatives or girlfriend, adding that he was also not in support of the matter being transferred from the military.
He said, “My wife is only suspecting my relatives and girlfriend because before this incident happened, we had a misunderstanding.
“I am a military officer and I can tell you that investigations are ongoing. I suspect those who surround my wife, but I know soon, God will expose those behind this.”
Sunday’s brother, Segun, who was among those initially arrested, denied knowing anything about the abduction of the child.He said he had not been in talking terms with Yetunde prior to the incident, adding she wanted to get back at him with the incident.
A counsel in the Femi Falana Chamber, Mrs. Olakitan Boluagbaje, said the chamber was preparing a petition to the state Commissioner of Police, Fatai Owoseni, for the case to be transferred from the military police.
She said, “I can’t imagine that such a thing could happen in a military barracks. And the way the military officers are handling the matter is pathetic.
“The main actors in this case are civilians, and it is only reasonable that the case is transferred to the police. We will be writing the CP to request the transfer of the case to him.”
Posted by Ogugua Obidike at 07:21