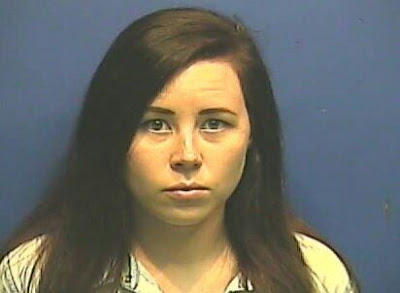 Kasey Warren, 27, a former tutor within the Carlisle County Schools District, Kentucky, US, allegedly had sexual contact with two pupils aged just 16.
One boy was said to have been attacked at the beginning of June while the other was attacked about two weeks later.
Police say Warren met the pair while working in the district in the latter half of the 2015-2016 term, but did not disclose which school the boys attended.
Officers say the alleged attacks took place in neighbouring McCracken County, but did not give any further details.
Cops say they received a report of the attacks on June 28, and a grand jury indicted Warren on Friday last week.
She is charged with three counts of sodomy in the third degree, and three counts of rape in the third degree.
Warren handed herself into officers yesterday and is now being held in custody pending further investigation.
Officers with the Kentucky State Police added that Warren is no longer employed in Carlisle County or anywhere else in the state.
Warren does not yet have an attorney listed for comment.
Her first court appearance has been set for September 15.
Posted by Ogugua Obidike at 21:11