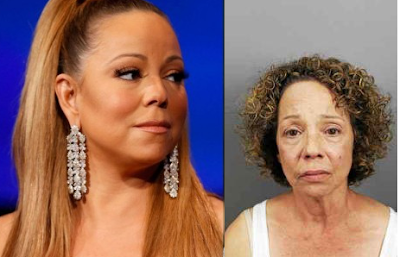 Mariah Carey's older sister was arrested on a prostitution charge Friday, and police are saying anyone who may have had a sexual encounter ,especially unprotected with the woman should see their doctor.
According to Mecury news,Alison A. Carey, 55 who is HIV positivr was arrested after soliciting money in exchange for sexual favors from an undercover police officer posing as a client.
Saugerties

When she was arrested Carey identified herself as the sister of the performer.
Alison was advertising her services on the Internet, and according to her posting, had been working out of the hotel for about a week.
One ad, posted at 6:18 p.m. Friday, contains two photos of Carey and states:
"Im a pretty lady looking for guys who are looking to have some fun and get into a world of pleasure that other woman just cant provide two you,woman with the ability to make the earth move for you and to get you to see stars, oh yea with me its,"ITS SUCH A SWEET,SWEET FANTASY BABY, WHEN I CLOSE MY EYES I COME AND TAKE YOU ON AND ON."
Carey  was arraigned in Saugerties Town Court and sent to the Ulster County Jail in lieu of $1,000 bail. She is due in Saugerties Town Court on Tuesday.
In March, Alison who is HIV Positive sent out a public plea to Mariah Carey to help her with medical bills  and said she was dying.She noted Mariah refused to reach out to her.Her brother ,Morgan Carey also branded Mariah a witch for abandoning them.
Posted by Ogugua Obidike at 11:56