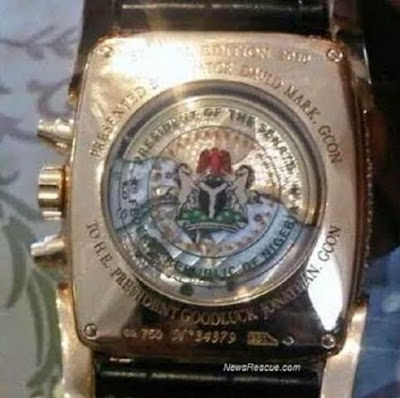 Senate President, David Mark reportedly gave outgoing Pres. Jonathan this $200,000 24k solid gold customized watch as a gift. According to Vanguard who reported that they received the image, the gold watch has ‘750 N (North) 34379″ on it, and also a ‘Special Edition 2010′ on the top and also bears: “Presented by Senator David Mark GCON,” and to “H.E. Goodluck Ebele Jonathan” etched into the gold as well as the Nigerian emblem over its visible working parts.
Posted by Ogugua Obidike at 17:48