Woman who stabbed husband to death, remanded in Prison[PHOTO] 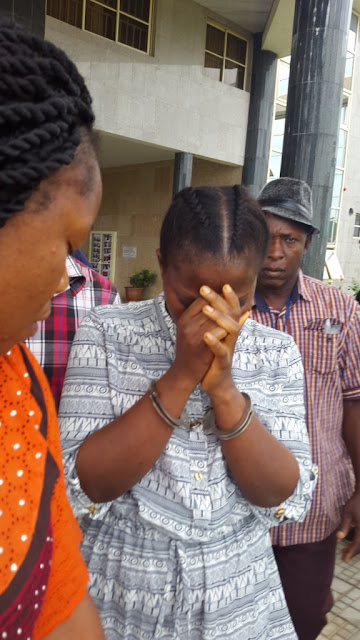 Mrs. Victoria Ambakadrimo, the 28-year-old woman stabbed her husband, Gagariga, to death during a domestic quarrel in their bedroom and was sighted by neighbours while attempting to dump his body on the road.
The presiding judge, Justice A.S Rotimi, adjourned proceeding to 18th June 2015, to enable the prosecuting (the state) hand over certain forensic evidences to the defence counsels before hearing commence.
However, an appeal by the prosecuting counsel to have Victoria remanded at the Okaka medium security prison in Yenagoa until final judgment is read was granted.
Though frail looking Victoria pleaded not guilty to the one count charge of murder leveled against, she sobbed over and again as she was escorted to prison at the end of the court session.
The alleged husband slayer before killing her husband works at the Bayelsa State Council for Arts and Culture, and is reportedly the daughter of a renowned journalist and retired director in the state Ministry of Information.
Posted by Ogugua Obidike at 09:27