Why I advised my son not to marry a Nigerian woman-Gov.Oshiomhole's Mother 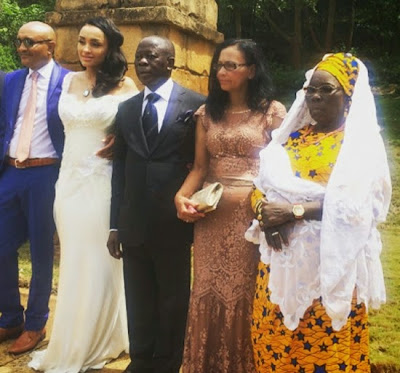 The mother of Governor Adams Oshiomole, Hajia Aishetu Oshiomhole said she told her son not to marry a Nigerian woman and she is happy he heeded her advise and married Lara Fortes.According to Vanguard she said

"I supported him to marry a foreigner so that the relationship between my son and his children will remain cordial. Our Nigerian women will go and destroy the family just because they want property.
That was the main reason I supported him to marry a foreigner when he told me about it. So I am happy about it. Besides, the new wife is a very good woman.
She behaves like Comrades late wife. Very accommodating, understanding and hard working. And you know my son travels a lot as a governor.
He needs a woman who understands his work and that is the kind of wife he married. She is just like Clara. Normally, people spend two years or less before they marry again but Comrade decided to wait for five years due to the love he had for his late wife. And Clara was a good person, very lovely and nice to all of us. So we supported Comrade for taking time to re-marry because we loved Clara.
Comrade and the former wife lived very happily, there was no quarrel, nothing at all and that was why he mourned for five years. I am happy that he brought a wife that will bring him and the children together”.

The cousin of the governor,traditional ruler of Iyamho community, HRH Bashiru Itameso,said
“I was happy seeing him remarry. I am happy because I never wanted him to marry a Nigerian because our people are wicked. I prefer it that he married a foreigner. If he had married a Nigerian, in-laws will come and start troubling him.
They will start tearing themselves apart for materials things and that will create serious problem between Comrade and his children. We all supported him to marry a foreigner”.
Posted by Ogugua Obidike at 13:37