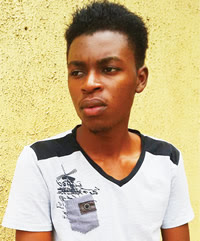 In a series of shocking allegations that have left his parents heartbroken, a 21-year-old undergraduate, Demilade Osholonge, who was initially reported as kidnapped, has accused his father and mother of engaging in occultism which he alleged was behind the many spiritual attacks he had been experiencing since he was 17.

Demilade spoke with Punch in hiding, maintaining that he would never return home to his father, Mr. Fatayi Osholonge, a lawyer and his mother, Olufunke, who is an evangelist.
Soft-spoken, with a mien that gave a hint of the affluent home he came from (a fact he confirmed), Demilade went into a narration that sounded much like a story out of a novel.
“It started when I was 10 years old and I started to see a young boy with blood coming
out of his mouth.
Sometimes, I saw the boy in a dream, sometimes I saw him even when I was wide awake but I was always the only one seeing him. I told my parents about it but they waved it off as mere dreams.
It continued till I was 17 and I started to bleed from the mouth as well. The first time it happened, I just noticed blood coming out of my mouth. I would wake up sometimes and blood would be coming out of my mouth. Sometimes, I would be wide awake and notice the taste of blood in my mouth.”
Asked what step his parents took when he told them, he alleged that they did not take him to the hospital for a checkup even after seeing the blood.

In the family home at Ajah area of Lagos, Demilade alleged that he frequently experienced spiritual attacks. He was asked to elaborate.
“Sometimes, I feel someone beating me while I sleep without actually seeing the person. Sometimes, I would lie in bed and not be able to move my body at all no matter how hard I try,” he said.
He said he became so frustrated with the strange experiences and the fact that he never got help.
“As the years went on, I started noticing that my parents were engaging in occultism activities because they visit herbalists and strange prophets,” he alleged.
When asked what evidence he had of such activities, Demilade said they sometimes took him along.
Demilade also alleged that in 2014, his parents took him to two Ifa priests in Ondo town in Ondo State, during which incisions were made on his waist. He lifted his shirt and showed the incisions on the left side of his waist.
He told Saturday PUNCH that the bleeding from the mouth continued despite the visit to the priests.
When asked whether Demilade’s other siblings in the house also experienced anything similar to the claims he made in his allegation and he explained that when he discussed it with his younger sisters, they told him none of them experienced such things.
How then did he arrive at the conclusion that his parents were behind his “spiritual attacks?” Demilade alleged that his suspicion became clearer to him when he ran away from home.

He said:
“I was a 200 level Mass Communication undergraduate at the Ajayi Crowther University, Oyo, but I decided to drop out so that I could be out of reach of my parents.
After I fled from home, I told my step-brother (Michael Ebun), who is my mother’s son from a previous marriage, about my problem and he took me to the house of a prophetess, Mrs. Mercy Oyebo. As soon as we got to the woman’s house, she prayed for me and I vomited blood.
I got deliverance and gave my life to Christ right away. Since that day, I have not vomited blood. I have been a good Christian since then.
I stayed along with my step-brother in the woman’s house between March and April 2015 for intense prayer sessions. We left after the sessions and I have been living with a friend at Maryland since then.
But I realised my parents were behind my problems when my mother started calling and cursing me over the phone. She said she would make me run mad. There was a time she was reciting incantation when she called me and I froze.”
Demilade declined to disclose his current home address.
“My parents are rich, they are using my destiny, that is why they want me back home desperately,” he alleged.
He said life is hard for him currently because he no longer enjoyed the affluence of his parents but maintained that he would rather suffer physically than be turned into an imbecile.
Asked about the motive behind bringing his story to the public, Demilade alleged that his parents got his step-brother (Ebun) arrested on charges of kidnapping.
“They locked him up for three days for kidnapping me. He only tried to help me. I have even spoken with the police on the phone that I was not kidnapped, but they insisted that I should come over to Panti (Department of Criminal Investigation, Yaba), where the case has been transferred to. If I went there, they would hand me over to my parents,” he said.
Saturday PUNCH learnt that Ebun has since been released on bail.
But issues took a different dimension when their correspondent contacted Demilade’s parents. They maintained they could only speak in the presence of investigators at the DCI.
During the encounter at the DCI, Mrs. Osholonge said she believed her son was still holed up in the prophetess’ house and that she had hypnotised him to the point that he was not thinking straight.
Demilade’s mother gave an off-the-record detailed narration of what she believed was the reason behind his son’s strange behaviour, but she insisted she did not want this information published.
When asked how she would respond to the allegations of occultism, spiritual attack, visits to the herbalists, incantations and curses made by her son, she said all she wanted was to have her son back.
Punch learnt that indeed there was an open case of conspiracy and kidnapping on Demilade’s issue, which the prophetess (Oyebo) is still wanted for.
A police officer who is familiar with the investigation said,
“We have spoken with this woman (Oyebo) on the phone. All we need is for her to come and give her side of the story. But all she did was send me a nasty insult by SMS. If she did nothing wrong, why is she in hiding?” He showed their correspondent the SMS.
The officer also said the police need Demilade to come forward to prove that he was indeed not kidnapped.
But Oyebo has said the officer was the one who first spoke rudely to him after she called him to explain her side of the story.
When Punch spoke with Oyebo, she alleged that she had made several attempts to see Demilade’s mother but that she had refused to show up. But Demilade’s mother said Oyebo is the one who had been avoiding her.

The prophetess said,
“Did the boy sound like someone who was hypnotised when you spoke with him? I told the boy to go to the office of the police public relations office to present himself and he did.
I wanted to have a talk with the mother because the steps the boy was taking were not good for the family. I wanted the matter resolved. I did not want him to live like a homeless child. But she refused to show up.
The boy said there were so many things he knew about his parents which was why they wanted him back so he does not spill the secrets. If the boy said going to his parents would mean the end for him, would I be the one to drag him to them?
I swear to God almighty the boy is not under my roof. I realise that if the boy is handled with care, he might just travel out of the country if he finds the means.
I have reported this case at the National Human Rights Commission in Lagos. I have been advised to write a petition to the assistant inspector-general of police, Zone 2, Onikan Lagos and send a copy to the Lagos State commissioner of police. After I have filed the petition, I will show up and we will tell Demilade to come and tell the police if I kidnapped him or not.”
Posted by Ogugua Obidike at 12:14