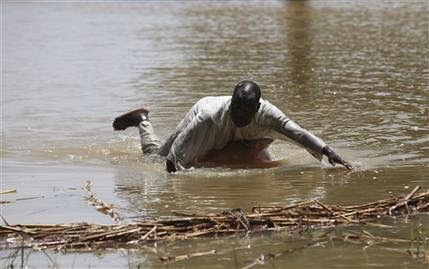 A boy in Daya Village, Fika LGA of Yobe State, today Monday March 31st allegedly killed his younger brother and removed his tongue and eyes, Premium Times reports
A resident of Daya, Ishmail Daya, said that the younger boy had gone missing three days ago and that while a search was going on in the village, the older brother was found with his brother’s tongue and eyes.
“He killed his younger brother and buried him on his father’s farmland,” Ishmail said.
Both the alleged killer and the victim are believed to be underage. He insisted that there had been no prior quarrel between the siblings.
“There was no fight, he just killed his brother. Though investigation is still going on, but there was no fight,” he said.
The district head and Galadima of Fika, Fika LGA, Garba Daya, confirmed the incident.
“Yes, it actually happened in Daya,” he said, adding that the killer was currently in police custody.
Efforts to reach the Yobe Police command proved futile as the state Commissioner of Police, Sanusi Rufai, did not pick his calls or respond to text messages as at press time.
Posted by Ogugua Obidike at 23:44