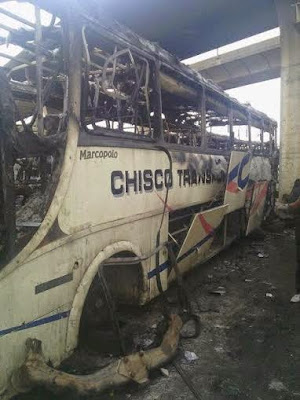 The fire was said to have started after some hoodlums took advantage of a political campaign rally to throw substances suspected to be explosives into the premises of the transport company in apparent protest against President Goodluck Jonathan’s poster on a building beside Chisco’s head office.
A witness who identified himself as Stanley told Sun News last week
"It was when the All Progressives Congress (APC) campaign train was passing during their political rally along Eko Bridge that some hoodlums supporting the party, took advantage of the rally to throw objects into the premises of the company when they saw President Jonathan’s billboard hung on the uncompleted building beside Chisco Head Office, thinking the premises belongs to the Federal Government.”
The building belongs to the Industrial Training Fund (ITF), a Federal Government parastatal sharing a common fence with the leading transport company.