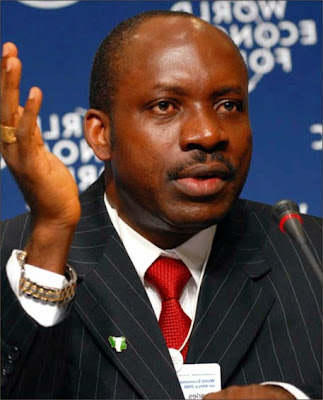 President Jonathan accused former CBN Governor Charles Soludo of being political with his claims that N30 trillion had gone missing under the watch of the Minister of Finance, Dr Ngozi Okonjo-Iweala. What President Jonathan said;


"So you’ll see that there is a lot of politicking about some of the serious issues. Not too long ago I read in one of the papers, I think Vanguard, that former chief economic adviser to President Obasanjo who also went to become a CBN governor… Soludo is a professor and first class material. Yes, making a first class in economics, he is a brilliant person. His secondary school records are fantastic. So by all standards he is a brilliant person. So the Vanguard wrote that he accused Ngozi; that N30 trillion was stolen under the watch of Ngozi in four years. Ngozi became a finance minister, let’s say from 2011 till date. From that time till now, our annual budget is between N4.3 trillion and N4.9 trillion. So even if you put all together, it is about 18 plus trillion naira, & not 30 trillion. The budget for these four years is less than N20 trillion, but Soludo said that under Ngozi’s watch they stole N30 trillion. This is in the papers, social media, stored in the clouds and will continue to be there. And when you type it in it will come out that during President Jonathan’s time they stole N30 trillion. We asked Ngozi how her colleagues in the World Bank saw the accusation and she said they were laughing and couldn’t believe it. There are certain things that you just cannot believe and if that is coming from somebody considered to be cerebral like Professor Soludo, then of course you know what the ordinary person would say. It is all political"