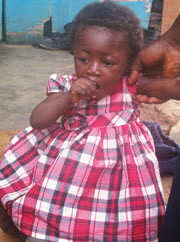 A two-year old baby girl stolen by unidentified men from her parents' home in Lagos last week Friday after a vigil has been found at the local wing of the Murtala Mohammed Airport, Ikeja, Lagos.
The little girl, Mercy Osunbawo, was in captivity for five days before she was found at the airport at about 2: 00 a.m. on Wednesday unaccompanied before she was rescued and handed over to the airport police. It was not certain how Mercy got to the airport.

OTOHMILLAR reports that Mercy was stolen in the night last week Friday by unidentified men while she was sleeping in between her parents at their Ejigbo home. The incident happened at their residence at
10, Adeite Osunbawo Street, Ejigbo, Lagos.
After the baby was stolen, both the parents and the police searched everywhere for her until she was found at the airport. The little girl was reunited with her family yesterday when the police handed her over to her parents. Neighbours, family members and their church members gathered at the their residence to praise and thank God for rescuing the girl.
The father of the girl, Olanrewaju Osunbawo, who confirmed the incident, was full of gratitude to God for the miraculous return of the child. He said he was still in shock about what happened. Osunbawo said that on the night the incident happened, he and members of his family had a vigil in their home till 2:30 a.m. before they went to sleep. He said the missing girl slept in between him and his wife on the same bed inside their bedroom, while four other children slept in their parlour.
Narrating how they discovered that Mercy was missing, Osunbawo said his wife, Kemi, first woke up and started looking for the girl and she went to their palour where other children were sleeping and did not find her. He said Kemi immediately woke him up and informed him that Mercy was missing and he went to the door and discovered that the door had been forced open.
The couple, who married in 2007 and have five children, could not explain how those who took their daughter away gained access to their apartment without their movement being noticed by any member of the family and their co-tenants.
Apart from stealing the baby, Osunbawo said the suspects also stole their three phones and money kept in the house by his wife. He said when they called one of the phones the men stole, the call was picked but they refused to answer for possible negotiation and since then the phones have remained switched off.
When OTOHMILLAR visited the Airport Police Division on Thursday, the DPO was not around to comment on the matter. However, a police source at the station confirmed the rescue and said Mercy was handed over to her parents.
Posted by Ogugua Obidike at 22:27