Ex-Wife Reveals Shocking Details About Fela, Says I Want The World To Know The Truth 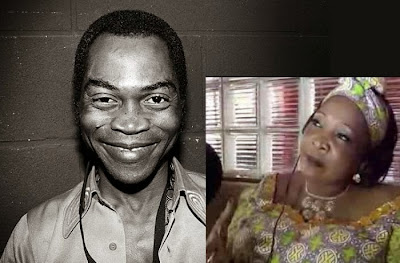 One of the wives of the late Afrobeat legend, Fela Anikulapo-Kuti, Laide Anikulapo-Kuti, Nee Babayale, has revealed some shocking details about the late legend. Though the interview was months back, I found it now and it's so revealing. If you haven't read it before, read it now. It was actually a video interview with Trumpet Media Group, but you can read the transcribed version after the cut.


How did you meet Fela?
I met Fela at a Sunday Jump in 1974. The shrine was opposite my house and some of my friends were selling things in front of the place, and we were just there doing our own thing, while Baba was inside doing his own thing as usual. It was the boys that made us know him well. They came to buy cigarettes from my friends, and wanted to take candy sweets for free, and I was a kind of person that would never allow anybody take me or the people around me for a ride. I protested, and the next thing I knew, was that a hot slap landed on the cheek of my friend selling the goods, and that's how we started fighting, that Fela had to come out. We narrated what happened to him, so Fela took the boy that slapped my friend inside and punished him. After that, Fela sent one of his drivers to me that if I'm chanced, I should come and see him.
Initially, I didn't want to go in, because my people must not see me in that kind of environment. I was 16 years old as at then but I had a big stature. When I got in, Fela said I should follow any of the cars to his house, but I didn't go. That was how I knew Fela liked me, and I liked him too, so every Sunday jump, I was always going there, well-dressed. Whenever he was going in, he always looked in our direction. However, to cut the long story short, we eventually began dating.

What was your parent's reaction when they knew you were in Kalakuta?
It was a tug-of war. My father never wanted it, because he thought people who were around Fela were hooligans, but it was a lie. Anybody who was a hooligan then was either a passer-by, or just a shrine-goer, and not part of Fela's inner caucus, because Fela never wanted trouble from any of his people. Fela fought with his music, but when people heard the lyrics of his songs, they thought he was a hooligan, which he was not. I was actually on break from school for two weeks when I decided to go and spend some time with Fela, but when I got there, I really enjoyed myself and didn't want to go back to school again though I was in Form Four then. My parents went looking for me in school, but the Reverend mothers and sisters there then said they didn't know my whereabouts even though all my properties were still in the hostel. They began searching everywhere, but they never thought I could be in Fela's place. It was actually Fela's friend, who happened to be my in-law, Uncle Tayo Mott, that informed my parents that I was with Fela. He was a very close friend to Fela and was also his DJ.

What were the actions your father took?
He was always coming to harass us wherever we went. He would send boys from Shitta, Surulere, to bundle me up wherever I was, and they would carry me. My father was a prominent, well-known and outgoing person, so he knew people like King Sunny Ade, Ebenezer Obey, and IK Dairo very well, so he begged the three of them to go and plead with Fela to release his daughter. On that fateful day when they came, I was in Fela's room, and we had just finished doing our 'thing.' When Fela was informed that the three men were there to see him, he went out, and later sent for me that I should dress up and come out. When I went out, he sat me down, and asked me if I knew the three men, and I replied in the affirmative. He asked me if I knew why they were there, and I replied that I didn't, so he told me they were there because of me. I said why, and asked them if they knew me, but Fela calmed me down, that they were sent by my father to beg me to come back home. I then told them that there was nothing happening there that they didn't know about because they were also in the music industry. I told them I was enjoying Fela's music and didn't want to go home.

Can you recollect what happened when Kalakuta Republic was invaded?
It started like a joke, but quickly escalated into war. Some traffic police officers 'Yellow Fever' came and said they wanted to see the person who drove a Range Rover that was in the compound because it had even numbers on its license plate, even though it was odd numbers. The gateman then told them that he was not in the best position to answer them, because as someone that wasn't learned, he didn't know the difference between odd and even numbers. The gateman then went inside to inform Fela, and he told them that he wasn't coming out. The Yellow Fever officers then went and came back with some soldiers because we were very near Abati Barracks then. When Fela was informed that there were soldiers outside, he first went into his mother's room, because he never went out without seeing her. Beko was already in the clinic then, but when he saw what was going on, he also came into mama's room. Before we knew what was happening, the whole thing degenerated into chaos.

How did the issue of the mass marriage come about?
When Kalakuta Republic was invaded and we all had different injuries, mine was on my navel, and all the other women making jest of me that I would never have a baby, even though I was just about 20 years old then. I really wanted to have children because of the special treatment Fela gave his children. I then decided to look outside because Fela didn't want to have any more children then. He went to one Baba JK in Idi Oro in Mushin to make his sperm watery. He was always drinking African medicine there, and that was what neutralized his sperm. So many women were always getting pregnant for him that he was terminating about six different pregnancies per day. It was Dr. Beko Ransome-Kuti that used to terminate it then. They're all dead now; me too, I'm going to die one day, but it's always good to put things right for the records. There was another girl then who I was close with, Adunni, so I told her that we should look for people who we would have children for. She had a baby for a taxi driver, while I had my baby for a journalist, Steve, with Punch Newspapers. He usually reported whatever activity Fela was involved in all round the world. He was the kind of person I needed at that time. There was a time we were in Ghana in Hotel Presidential, and that was the time I went in with him. Shortly after that, I started experiencing morning sickness, and when it was confirmed that I was pregnant, I was very happy.
Soon after that, Fela called me to go in with him, and I told him that I was pregnant. He said, 'What' and I repeated it. He came from the third floor to the first floor to Mama's room, and he told her, “Maami, you know what, Laide is pregnant.' Mama asked him who was responsible, and he told her he was the one to cover me up. Mama then said 'Fine' because she knew Fela liked me and I liked Fela. Mama never knew that I had intercourse with Steve, even though his room was directly opposite mama's own in Ghana. This is a true life story. I want you to bring it out and let people know.
After that time, Fela now called Steve and the press that 'these women have suffered a lot with me, so if anyone of them wants, they can marry me and be having children.' Steve said if that was what he wanted, then, no problem. So Fela put out a notebook and said that the people who want to marry him out of all the women in the shrine should put their names down. In all, we were 27 that wrote our names, and Fela told the rest that if they didn't write their names, he wouldn't sleep with them.
On the day of the wedding ceremony, Fela's best pal, Tunji Braithwaite, who was supposed to join us together, ran away from his chambers, saying that he had never seen such a thing before for a man to marry 27 women at the same time. He had thought it was a joke when Fela told him earlier. The following day, Fela called an Ifa priest and they came to join us together at Hotel Parisona in Anthony, Lagos.  Fela put money on everybody's heads and we collected our certificates of marriage to him.

Can you describe how it felt like being with him?
Fela was a true living legend. He was the one and only man that God put in our midst, but people never knew his worth until he was gone. Fela was always chewing music in his mouth whatever he was doing. Whether he was eating, driving, or with a woman in the room, he was always chewing music in his mouth with his pen and paper with him always. He was very good at writing in short-hand; in fact he was good at everything you can ever think of. There was nothing he did wrong; except you didn't know him. He was a messiah; if we had given him a chance, Nigeria would have changed, but people like Obasanjo never gave him a chance.
Whenever Fela wanted to make music, he sang about the things around him.

Talking about bedroom matters, how did Fela rotate between his numerous wives?
Fela always called his wives based on how he enjoyed them; if he did not enjoy you, he would not call you. Even after the marriage, it continued like that.
Posted by Ogugua Obidike at 22:03