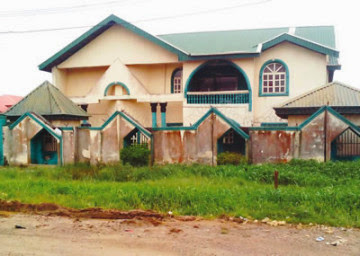 A businesswoman, identified as Lizzy, has been found dead at her apartment on the Odusanya Oduguwa Crescent, Green Estate, Amuwo Odofin Area of Lagos State. The incident happened on Saturday morning.
PUNCHMetro reports that the 39-year-old indigene of Anambra State was murdered in cold blood by her boyfriend who also carted away her money, ATM cards, jewellery and a Range Rover Sport.
Their correspondent learnt from a police source that Lizzy, an executive in a networking firm, had four children from a previous marriage which had broken down and was planning to travel to the United States on Thursday (today) when she was strangled by the suspect.
The source said:

“She was into networking and owned houses in different parts of Lagos. She was an international businesswoman and travelled round the world. She had said she would be travelling to the US this week and had gone to the bank with her boyfriend to withdraw
N4m. When they both got to her house, the man tied her hands and strangled her. He took the money and went away in the car.”
When Punch correspondent visited the victim’s residence on Tuesday, he saw that the house was locked up. A security man, who did not identify himself, said the house was shut by the police.
“The police have been here and they locked up the house.
A reliable source said the deceased had four children from a previous marriage which had broken down.
She was initially married and even had four children. We learnt that her husband impregnated their maid and she said she could not live with the shame. She separated from the man. Since then, she had had several boyfriends who promised her marriage but only duped her. She even had one of them arrested. The case is still with the police. This last one that killed her, they had been dating for three months. The woman fell into this because she always opened up to those close to her.”
A police source added that the suspect, after the crime, fled to a neighbouring country. He said:
The boy is on the run. He ran to Ghana with the woman’s Range Rover Sport and money. But he has no hiding place under the law. He will be arrested. You can’t kill a human being without expecting retribution.”
The Police Public Relations officer, Lagos State Command, Ngozi Braide, confirmed the incident.
She said the police had begun investigations.
She said:
“Yes, the incident happened. She was murdered in her house on Saturday morning and investigations have begun to unravel the cause of her death.”
Posted by Ogugua Obidike at 16:53