I Enjoy Killing People And I Will Kill Again- Sadiq Ogwuche 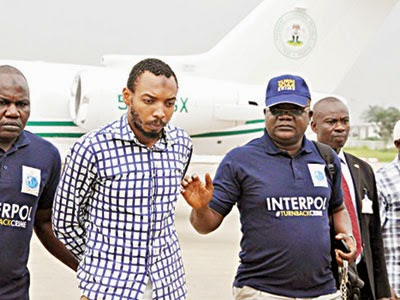 Nyanya bomb blast suspect, Aminu Sadiq Ogwuche who was recently extradited from Sudan, and currently answering questions from security operatives has said, he will never beg for forgiveness because he did the right thing by bombing Nyanya motor park which led to the death of over 70 people and left 120 injured.
Sadiq said if left alone he is willing to do more. He said a lot of shocking things which will make you wonder how a man that  once lived in a western world could turn out to be who he is now. No be me go use my hand type all his negative beliefs.
“I don't deny that I am the executioner of the Nyanya bomb incident. I did it in order to draw government's attention to our demands. We want our detained colleagues released and compensation paid to those of our colleagues who were killed by the federal troops during operations. We want Islamic rule in the whole of northern Nigeria. Western education is a sin against Allah. It's time for dialogue between government and Boko Haram leaders for the way out of the deadlock,” he was quoted as saying.
“The government must do something now or the bombing will continue. There is no regretting anything because we are fighting a just cause to liberate our people from western education and religion,”
“Federal government has been trying without success to wipe out Boko Haram. They killed our leader, Muhammed Yusuf and hundreds of others yet we still exist. We are a force to be recognized. You ignore us at your own peril. We are particularly pained by the killing of hundreds of our members across the forest in northern part of the country. Although we equally killed federal troops, we will never forgive the federal government for the incessant killings. We are well armed to fight back and we will never surrender.
Boko Haram is well funded and highly equipped organization with capacity to take over the whole country if it so desires, he ranted.
“If I am left alone, I will still kill those infidels who have refused to repent of their sins against Allah. This is my mission on earth. My mission is to wipe out infidels from the face of the earth. You call me bomb detonator, and I love that. I am ready to kill again. In fact, I enjoy killing people who are unbelievers; those deceived by western education and disobedient to Allah and his holy Koran.
I don't care what will happen to me now because if I die, I shall go to heaven for doing god's work. I won't beg anybody for forgiveness but I can assure you that my so called trial will not be an easy exercise. If I like, I plead not guilty in court to make things difficult for the federal government but inside my mind, I know I did the damn thing. It is my word against federal government evidence. I know a little bit about the intricacies of the law through the study of several law books. Nobody can push me around because I am not a fool,” said Ogwuche who was born in the United Kingdom.
Posted by Ogugua Obidike at 08:45