Aisha Buhari said so many things at the presidential villa last weekend!!!

The immediate past and present Nigerian First Ladies have something in common - they love to talk.
Patience Jonathan's administration in the last 6 years, gave us epic one liners that will forever be embedded in our generation’s lingo.
Who can forget “Na Only You Waka Come” and the “There is God ooooo" and her many revealing statements while campaigning for her husband.
The current first lady, Aisha Buhari has barely spent a few weeks in the office and you just gotta love her outspokenness.
At a ‘Thank You’ dinner hosted by Mrs Aisha Buhari, over the weekend, the First Lady said a lot, yes she did.
She started with the Goodluck Jonathan administration.
“There was nothing that people did not say about the past administration. It is not former President Goodluck Jonathan that is not good but the people around him. So, the people that are going to be around President Buhari have to be very careful because this election ended peacefully."
And reminded us how many years it took her husband 12 to get to power.
“We are praying and hoping that people around him should know that it took him 12 years to get to that position and they must know that they are coming to serve the masses, not General Buhari.
“It is the people that are around him that will determine the political health of our state.”
“I will like to inform you that in the past regime, whether it is true or false, only God knows, some people were going round and parading themselves as personal assistants. 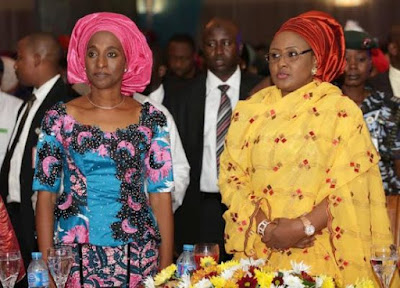 “If you wanted to see the President’s wife, you will pay $30,000 or $50,000 and if you are seeing the President, you will pay all that you have saved in your lifetime.
“This will not happen in our regime. Whoever asks you to give a single penny in the name of coming to see the President or his wife is not our (member of) staff. He is not an APC member, it is a lie. Don’t be deceived,” she said.
“Many people did not know why I was not appearing for the last three campaigns. I appeared only this time and I think it made a lot of difference. A lot of people said my husband earned four million votes as a result of my campaign.
“We were not sure but with the popularity of my husband, we thought then that he needed female support to cancel all sorts of gender bias people have been attaching to him like that he kept me under a purdah.
“He had never kept me under a purdah even for a moment since I got married to him.
“My husband is a gender-sensitive human being, having so many girls as his own biological children and then having me as a wife, then you can see the generation gap. He allowed me to go to school. To cut the story short, he is the pillar of my success”
She further said she doesn't want to be addressed as the first lady.
"I am the wife of the President and will be addressed as such going forward.
Oh by the way she is currently trending on twitter for all these revelations!
Posted by Ogugua Obidike at 14:48