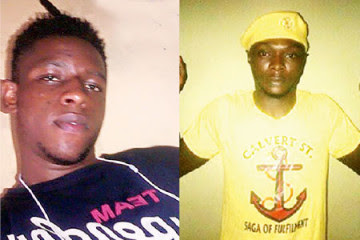 The police in Lagos are on the trail of a suspected cultist, Anu Olokodana, for allegedly killing his friend, Adeleke Awosiga.
Punch Metro gathered that Awosiga drew Olokodana’s ire when he refused to join his friend’s cult group in the Isheri, Ojodu Berger area of the state.

It was learnt that, Olokodana, who reportedly celebrated his birthday on the day of the incident, drowned Awosiga in a swimming pool during the party.The party was said to have held at a hotel in the Isheri area.
Our correspondent learnt that on Saturday, June 13, 20-year-old Awosiga had come for Olokodana’s birthday bash, which was to last till dawn.It was said an argument, however, ensued during the party, which allegedly made Olokodana to twist his friend’s neck before drowning him.


It was gathered that Awosiga’s family, who stayed in the Mowe area of Ogun State, reported the matter at the Isheri Police Division.
Our correspondent learnt that the deceased’s corpse was recovered by residents and policemen the following day.The suspect and other cult members reportedly went into hiding after the incident.

It was learnt that two of them had, however, been arrested by the police. The duo reportedly confessed that they belonged to the same cult group with Olokodana.
One of the deceased’s relatives, who did not want to be mentioned, said Awosiga and Olokodana had been childhood friends, which made it difficult to believe that the suspect could kill his friend.
He said,
“The suspect, Olokodana, is popularly called T-Fire. He is a cult member and he was at the party with other member of his cult group. Awosiga was also there to celebrate his friend’s birthday. As the party went on, a disagreement ensued between the two.
“Both men have been childhood friends, but their point of disagreements had always been over the cult membership. The suspect had always persuaded his friend to join his cult group, but the latter was not interested.
“On that Saturday, Olokodana invited many of his friends, including the deceased, to a hotel in the Isheri area to celebrate his birthday. The young men drank and had fun till dawn. The trouble started at about 4.30am.
“The next thing we heard was that Leke (Awosiga) had been drowned by Olokodana, and all his cult members had fled. We are still in shock over the matter.”
A resident who lives near the hotel, identified only as Alake, said Awosiga was killed when the cult members were dancing with one another’s girlfriends.
He said, “Olokodana’s girlfriend, identified only as Rashidat, at about 4am, started dancing with another cult member. Awosiga also requested to dance with her, but she declined and asked, ‘Are you one of us?’The deceased felt insulted, and replied that he was older than her. Other cult members got angry and pushed Awosiga out of the party hall.Olokodana also warned his friend not to go back to the hall.So, Awosiga stayed at the hotel’s swimming pool and started threatening the cult members. Olokodana went to the swimming pool area, twisted his friend’s neck and pushed him into the pool. That was how he drowned.”
PUNCH Metro learnt that the cult members immediately fled the hotel.
Our correspondent gathered that the deceased was rushed by residents and policemen to a nearby hospital where he was confirmed dead.His corpse had reportedly been deposited at a morgue in Yaba, where an autopsy would be carried out. The Lagos State Police Public Relations Officer, DSP Kenneth Nwosu, confirmed the incident. He added that the matter had been transferred to the Department of Criminal Investigations, Yaba
Posted by Ogugua Obidike at 06:57