Nigerian University Don Who Says He Has Cure For HIV 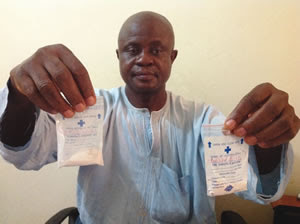 A University Don, Professor Maduike Ezeibe of the Michael Okpara University of Agriculture Umudike, Abia State, has claimed his recent therapy for the dreaded Human Immunodeficiency Virus and Acquired Immunodeficiency Syndrome is real and effective. According to Ezeibe, he discovered the therapy when he decided to join the medical world to search for a solution to HIV/AIDS.
His research into the therapy known as ‘Antivirt’ (Anti-Viral Therapy) started in 1994, but he was able to discover the therapy in 2013 when his research was published in the British Journal of Medicine & Medical Research, Ezeibe explained.
Mr Ezeibe says two essential minerals, aluminum silicate and magnesium silicate, used in producing the therapy, are mostly found in Umuahia and parts of Abia State which then gives him an upper hand. It will also make the therapy which he claims would take an average of two or three months to cure cheaper and affordable.
Posted by Ogugua Obidike at 11:57