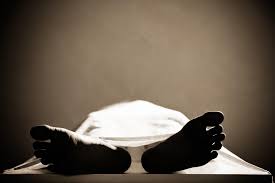 A man Onyema Orji, was forced to officially 'wed' his dead ex-wife so that he could claim his children from her family.
The incident which happened in Nwakpu community in Ikwo Local Government Area of the state, according to reports, was 'necessary' because Orji had divorced the woman known as Blessing, and she left with their children and later got married to another man.
After she died from a brief illness, Orji reportedly visited the family with items for her burial ceremony and to take home his children but was told by her family that for him to claim the children, he had to perform the traditional marriage rites on the late Blessing since he had not performed the rites when they were married, and to also enable him claim his kids.
Posted by Ogugua Obidike at 13:13