Bullet Proof SUV: Ibim Semenitari Replies WIke, You Made Away With Everything You Had When You Were The COS 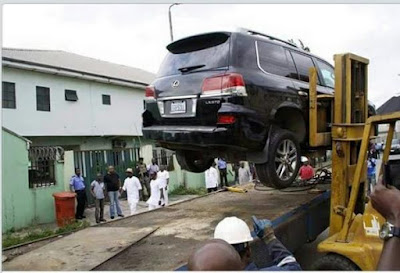 The former Information Commissioner of Rivers State, Mrs Ibim Semenitari whom State security officials forcefully took away her Lexus bullet proof SUV has released a press statement concerning today’s invasion of her home. Below is what she said. Also read what Governor Wike had earlier sent out immediately after her release. So much drama.
“On Thursday June 18, 2015, over 10 policemen armed with machine guns and in two trucks – one Ford Transit and one Hilux arrived my residence, No 12 A Ernest Ikoli Street, Old G.R.A Port Harcourt. Without either a search warrant, letter or precious information, they forced their way into my premises.
My security guard on duty requested to know their mission and who sent them. They refused to disclose either, but went round taking photographs and videoing my premises.2
The security guard got in touch with my assistant who spoke with the men, explaining to them that I was out of town and again requested to know their mission and purpose.
Again they declined insisting on seeing me first. She then got in touch with me by phone as we were uncertain as to the identity of the policemen in question.
Upon further investigation and after about 3 hours of them laying siege on my premise, I was told that they were from Rivers State Government House and had been sent to recover vehicles in my possession.
They attempted to break into a Range Rover Jeep belonging to my Husband and bought long before I was made Commissioner in Rivers State Government, damaging the front door. The vehicle in question contrary to the lies being paraded is not an armoured vehicle and has never at any point belonged to the Rivers State Government nor its agents including myself as Commissioner of Information.
By the time I finally made contact with them and expressed my displeasure, they insisted that they would take away a Lexus jeep duly allocated to me as Commissioner of Information and which by law I am entitled to leave with upon leaving office.
The monetization policy of the government allows public officers to leave government with their official vehicles as this is in lieu of vehicle, allowance, transport and other allowances, which they cannot draw because of the monetization policy of 2002.
Mr. Nyesom Wike served as Chief of Staff, and upon departure left with all the vehicles he used as Chief of Staff. This has been the practice since this democratic dispensation when President Olusegun Obassanjo instituted the monetisation policy.
Having served as Commissioner for two tenures, I amentitled to my status cars and have proof of allocation.
While I understand that Mr. Wike feels a dire need to destroy the reputation of Governor Amaechi and all those worked with him, it is unacceptable that he will engage in brigandage, thuggery and underhand tactics to do so.1
A simple letter from any government official requesting me to make a submission or tender documentation would have been the appropriate way to go and I would have willingly tendered all the relevant documents to them.
Breaking into my home, invading my privacy, damaging my property and removing property from my premises is inappropriate and illegal.
I have chosen however to put out these details in the public space as it is apparent that for some persons only a destruction of my hard earned reputation would do and this I would not accept. My records in the Ministry of Information are crystal clear I hope that Mr. Nyesom Wike is able to say same about his tenure in every office he has held.
Forcing their home into my home unlawfully isn’t the appropriate way for any government that claims legitimacy to behave.

Below is the earlier press statement released by Governor Wike;
“In furtherance of efforts by the Rivers State Government to recover government property from officials of the immediate past administration in the state, security agents and government house officials on Thursday took possession of government vehicle from the home of the former spokesperson for the Amaechi administration, Mrs Ibim Semenitari.
The security operatives carried out the operation at the home of Mrs Semenitari located at Ernest Ikoli Street, Old GRA Port Harcourt. The operatives recovered a Lexus Armoured Vehicle from the residence. Another Range Rover vehicle is said to have been in the possession of the former Information Commissioner.
It will be recalled that top officials of the outgone Rotimi Amaechi administration carted away several government property and vehicles prior to May 29. Governor Nyesom Ezenwo Wike has since assured the people of Rivers State that all government property illegally carted away before his inauguration will be recovered and those found to be involved in the illegal act will be brought to justice.