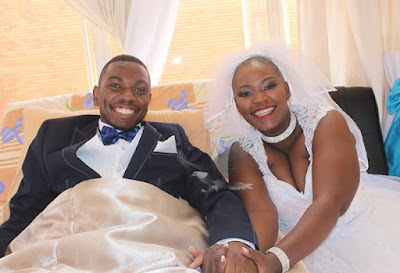 A young man who was two weeks ago involved in a road accident and lost one leg wedded his fiancée while on his hospital bed at the University Teaching Hospital in Lusaka Zambia
Suzyo Muzuri 28 married Diniwe Bowa 27 yesterday morning at a wedding service that was conducted by Bethel Christian Center Bishop Andrew Mwenda in Ward 11 at UTH.
The couple exchanged marriage vows in the presence of their families, close friends and patients not by design but circumstances.
Mr Muzuri, an accountant at National Milling Company, wedded Ms Bowa at UTH because he was involved in an accident that resulted in him losing his right leg two weeks ago.
Instead of rescheduling the wedding, the couple went ahead and tied the knot as their families and friends witnessed the emotional ceremony, which brought the entire ward to a stand-still.
Mother of the bride Loveness Bowa could not hide her happiness, Tumfweko.com reports.
“This is an emotional time for the family because instead of the accident breaking the couple, it has remained strong and has refused to be defeated. I am very proud of my daughter and my son-in-law. Theirs is a love story that will stand the test of time,” 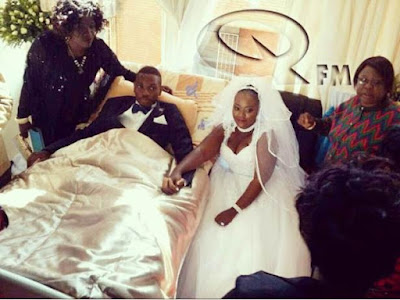 Mrs Bowa said.
She said instead of listening to concerns from the family after the accident, her daughter remained committed to marrying her husband no matter his physical condition. And Bethel City Church bishop Andrew Mwenda said the marriage signified sacrifice, loyalty and commitment.
“This wedding expresses genuine commitment to one another. My message to the couple is to remain committed even when it seems impossible. Commitment is important. Even when the young man was involved in an accident, she remained by his side,” he said.
Posted by Ogugua Obidike at 09:35