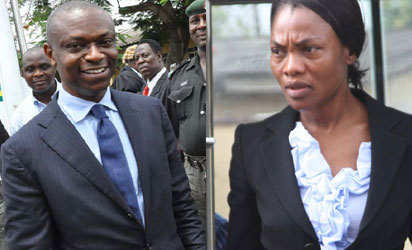 A Lagos High Court sitting in Ikeja today freed the former Managing Director of defunct Bank PHB, Francis Atuche who is standing trial for allegedly stealing N25.7 billion. Atuche and his wife, Elizabeth, were standing trial over alleged theft of N25.7 billion belonging to the bank (now Keystone Bank). They were prosecuted alongside a former Chief Financial Officer of the bank, Ugo Anyanwu.
In September 2014, Atuche denied the theft charge preferred against him by the Economic and Financial Crimes Commission (EFCC). The former bank chief had said that he could not engage in theft as a member of Catholic faith.
He also told the court how he grew a mortgage finance company, Pinnacle Investment Ltd and transformed it into Platinum Bank Plc back then. Atuche, his wife and Ugo Anyanwu were all however freed by a Lagos High Court today.
Posted by Ogugua Obidike at 17:20