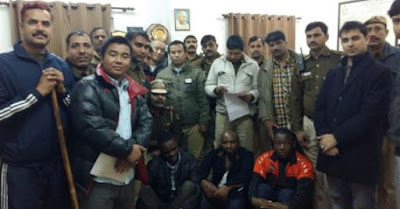 33 year old Nwachorudo Charles Echejohn and two of his friends have been arrested by Indian police for allegedly gang raping a 19 year old Indian girl in West Delhi's Uttam Nagar area.
According to India police, the men were arrested on Dec. 29th after getting a statement from the victim, who claimed she was lured into the home of one of the men.
The girl, who is a student, said she came to Delhi for the holidays and was staying with her brother's female friends. On the night of the incident, she said the two women suggested they go to the club to party but instead took her to the home of one of the Nigerians. Later in the night, one of them started touching her inappropriately and when she resisted, he forced himself on her. Two other guys allegedly joined in.
In her statement to police, she said she managed to escape and contacted her brother who then called the police.
Posted by Ogugua Obidike at 12:53