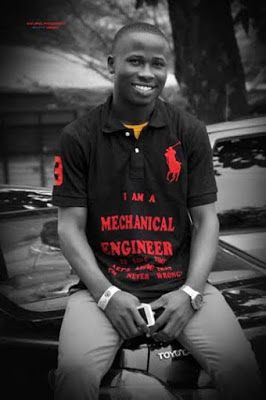 The Rivers State Police Command has admitted to killing a final year student of the University of Port Harcourt, Oghenekevwe Edah.
It was learnt that the Assistant Commissioner of Police (Operations), A.A. Muhammed, who delivered a condolence message to the deceased’s family on behalf of the state Commissioner of Police, Musa Kimo, promised that justice would be done in the matter.
Last Sunday, Oghenekevwe was returning from a church and was standing at the Assemblies of God Church Junction, in the Alakahia area of Port Harcourt, when a police van driving against traffic hit
him.
The police were said to have attempted escaping from the scene, but were held by passersby who compelled them to take the victim to the University of Port Harcourt Teaching Hospital, where he died.

The police reportedly denied killing the victim, saying they only picked him from the road after he was knocked down by a vehicle.
PUNCH, however, learnt on Tuesday that the police had admitted to killing the student.
His younger brother, Emmanuel Edah, said Oghenekevwe’s death was painful to the family because he was their breadwinner.
He said:
“I was in Delta State when one of his roommates called me and said he had been knocked down by a police van. I was told that he was coming from the church when the van hit him and the police wanted to reverse their vehicle to make it look as if they were on the right path, but people held them down and forced them to take him to the hospital.
I got to the emergency ward of the hospital and I was told that he was dead.”
He said the victim’s roommate reported the matter at a police station and he later went to make an entry as well.
He said the police contacted them on Monday and the ACP promised to get justice for the victim.
He said investigation revealed that his brother was killed by a highway patrol vehicle.
Lamenting the death, Emmanuel said:
“We are seven in my family and two of us are the only boys. For the past 15 years, he had been doing professional photography and event coverage. He took care of us with the money and use the rest for his education. We want justice and nothing less. We have decided to follow the case legally and not take laws into our own hands.”
The SUG President of UNIPORT, David Dariereka, said the students would stage a protest in the school. He said:
“We are not going to take it lightly with the police because we have discovered that he was killed by a highway patrol van and we have been able to trace the vehicle.
We have asked our lawyer to take the matter up and soon, we will be having a protest to show that we will no longer condone this kind of thing. On January 1, we also lost a student on that road. We are going to use this to remind the authorities that human life is very precious and we can no longer be killed like fowls.”
The state Police Public Relations Officer, DSP Ahmad Muhammad, declined further comment on the case, saying the police wanted to conclude investigations.
“We want to conclude our investigations, so for now, we will not say anything again on the matter,” he said.
Posted by Ogugua Obidike at 07:22