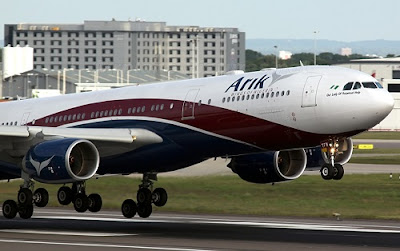 A 57-year-old man, Albert Nnadi, was on Wednesday confirmed dead on board an Arik Air flight from Owerri to Lagos.
The passenger was said to have been found dead at the point when passengers were disembarking the flight at the Murtala Muhammed Domestic Airport Terminal One, Lagos.
The deceased, who was accompanied by one of his relatives, identified as Damien Nwachkwu, was said to be traveling to Lagos to seek medical assistance on obesity.
The body of the man has been deposited in the mortuary by the Police, while investigation into the immediate cause of death is ongoing.
Posted by Ogugua Obidike at 08:47