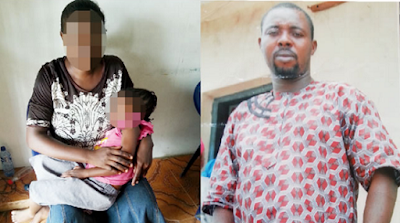 Two months after Saturday Punch reported that a 37-year-old mechanic, Thompson, sexually abused his daughter till she lost her voice, the victim’s mother has raised the alarm that the authorities had released the man without prosecution.
Thirty-two-year-old Funmi told Saturday Punch that she and her children had been living in fear of what Thompson might do to them for causing his woes.
Thompson was arrested after Saturday Punch reported the bizzare case in October when Funmi alleged that her husband had on many occasions raped their four-year-old daughter, Rebecca, in their home in Igando area of Lagos.

She alleged that apart from having sexual intercourse with the little girl on several occasions, she had caught her husband inserting his finger into the private part of the girl more than once, all of which had traumatised Rebecca to the point where she could no longer talk.
For reporting the case, Funmi and her children were allegedly threatened by her husband, forcing her to move out of his house.
Funmi said, “With all that he did, I thought he would face the law. I thought he would be prosecuted for the abominations he had committed.
“Now, I look over my shoulder anytime I walk on the street. I always tell my children to be careful too. Who knows what he is planning against us?
“I fear for my life and that of my children now. After he was released, he went to the school of my children and attempted to take them from there, but the teacher did not release them to him. I did not even know he was released until they told me he visited the school.”
She said Rebecca is gradually regaining her voice.
Funmi, who alleged that her separated husband was diabolical, had explained that the sexual abuse of their daughter started when the girl was two years old.
She began, “It started in 2013 when I suddenly woke up one night and saw my husband removing the panties of my daughter. It was in the midnight. I wanted to shout but I wanted to see what he was up to. So, I acted like I didn’t see him because the room was relatively dark.
“When he pulled down her panties, he looked around and when he felt convinced that everyone was deep asleep, he stood up and moved to where the girl was and dipped his hand in her private part. I screamed.”
The case was reported to the Lagos State Office of the Public Defender, where a lawyer was assigned to handle the case.
“I was surprised that he has been released. Nobody told me anything,” Funmi said.
She told Punch correspondent that efforts to get an explanation from the lawyer assigned to her case has been abortive.
Director of the Esther Child Rights Foundation, Esther Ogwu, who reported the case to the OPD, explained that the case might have been destroyed by the police when it was transferred to the Department of Criminal Investigation in the state.
She said, “I can say with confidence that the problem could not have come from the OPD because they don’t waste time in handling terrible cases like this.
“The police were the ones who released him without prosecution. They even called the woman a liar for reporting that her husband raped his own daughter when she was invited to come and give her statement.
“It is unfortunate the woman is no longer safe now. She told us that she now runs from one place to another in fear of her husband. I feel sad when things like these happen in our country and the culprits go scot-free.”
When Punch correspondent contacted the spokesperson for the OPD, Mr. Adeoba Adeniji-Adele, he said he would need to make findings about the status of the case before giving the agency’s official comment on the case.
Posted by Ogugua Obidike at 09:58