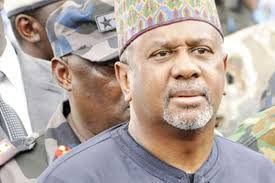 The National Task Force on Illegal Importation of Firearms, NATFORCE, on Tuesday threw more light into its claims that the ex-National Security Adviser, Col. Sambo Dasuki (rtd), among others, allegedly aided the importation of several trailers of illegal arms and ammunitions into the country.
The NATFORCE alleged that the arms were delivered to the Islamic terrorists, Boko Haram, a group that has gruesomely murdered tens of thousands of innocent Nigerians.
One of the documents made available by the NATFORCE revealed that over 22 trucks of arms, ammunitions and light weapons were imported illegally into the country within the period.
The truck numbers that allegedly brought the arms and ammunitions into the country, which were allegedly cleared by the Customs are: “LSR468KD; KTU22XM; XW136RBC; LSD21ZL; 2578A0; BDG182XF; AGI463XX; XK442AB; LSD871XL; GT2131F; GT4813R; EKY361XC; GC9570R; LND692XL; TG7974AL; XL101BDG; TG2322AN; AG1390RB; TG3492AL; XV866APP; X875EPE and AU2080RB.”

In a letter dated 27th of July, 2015 addressed to President Muhammadu Buhari, titled: “abduction of Chief Dr. Osita Emmanuel Okereke, (OON) by the former National Security Adviser, Col. Sambo Dasuki (rtd) & Sir. Mike Okiro, Chairman Police Service Commission”, the petitioner, Dr. Okereke, who is the Director General of the NATFORCE alleged that because he refused to back down on the activities of his agency in combating illegal importation of arms, ammunition and light weapons, the duo had vowed to kill him.
He alleged that on the 20th of November, 2014 at Seme Border, one Col. T Isah of 242 Battalion of the Nigerian Army came to Seme Border with his men loaded in five Hilux pick-up Vans and over powered the men and officers of the National Taskforce (NATFORCE) and escorted ten trucks of Arms and Ammunition into the country.
“When we alerted the presidency, ex-NSA Dasuki summoned Col. Isah, who was his boy, to Abuja for purported interrogation but little did we know that Col. Dasuki and ex-CG Custom Diko were hands in glove as Col. T Isah was never interrogated as he is their agent vide Sam Express Company acting as their agent”, he further alleged.
According to him, “Col. Isah of 242 Battalions of the Nigerian Army Lagos has always acted the script of the former NSA; the ex-CG of Custom had at about the same period personally gave ex-NSA about 30 vehicles which contained arms were subsequently sent to Kaduna and packed at Ndediko Park along Nnamdi Azikiwe Way near Mando, Kaduna State.
“It would not be out of place if your Excellency finds time and confronts Col. Dasuki with the ownership of the said arms and ammunition as the whole incident was engineered by him and the ex-CG of Custom by name Mr. Diko.
“Sir, it will be noteworthy to mention that Col. Dasuki and the former CG of Customs swore that they would eliminate me (Dr. Okereke) from the surface of this earth; they have followed up with actions. There have been assassination attempts on my life hatched by the CG of customs and retired Col. Dasuki.”
Meanwhile, it was gathered that earlier, the NATFORCE had in a letter dated 3rd December, 2014 with Ref: NTF/R.012/PWM/056 addressed to former President Goodluck Jonathan titled, ‘Very Urgent and Confidential’; disclosed that Col. Isah and a business mogul called Sam Express were allegedly in the habit of aiding and abetting importation and release of arms, ammunitions, light weapons and contraband goods from Seme Border.
The letter called on the Federal Government to request the scanning report from the Nigerian Customs and institute a high powered investigation into the matter with a view to bringing culprits to book for a better Nigeria.
However, the NATFORCE alleged that the former NSA sat on all the letters.