Nigerian sentenced to death by hanging for drug trafficking in Malaysia 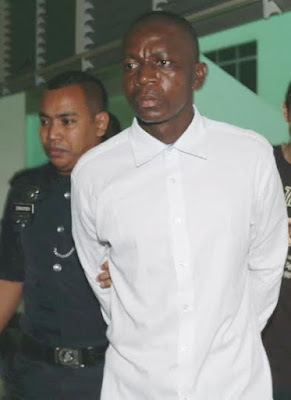 A Malaysian high court today sentenced a 37 year old Nigerian man identified as Ekene Collins Isaac to death by hanging after he was found guilty of trafficking 915.6 grammes of methamphetamine three years ago in Malaysia.
Court papers showed that Collins who was a cleaner in Nigeria, committed the offence at Wad 6C, Serdang Hospital, at Jalan Puchong, Kajang, between 7.20 a.m. on March 3, 2012 and 1.00 p.m. on March 5 of the same year. The banned drugs were found inside his body.
The presiding Judge, Datuk Wan Afrah Wan Ibrahim handed down the sentence after she was satisfied that the prosecution had proven the case against him. He did not show any reaction when the sentence was read out by Wan Afrah.
Posted by Ogugua Obidike at 20:55