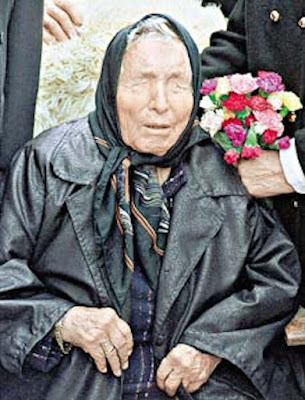 A blind psychic who is credited with predicting the 9/11 terror attacks and the 2004 Boxing Day tsunami may have warned of the rise of ISIS decades ago and also made dire predictions for 2016 and beyond.
Baba Vanga, a Bulgarian clairvoyant, made a chilling prophecy warning of an invasion of Europe by Muslim extremists in 2016.

She foresaw a "great Muslim war" which would begin with the Arab Spring in 2010, play out in Syria and end with the establishment of a caliphate by 2043 with Rome at its epicentre.
She was known as 'Nostradamus from the Balkans' due to her reputed 85 per cent success rate.
According to News.com.au ,Vanga, who died in 1996 aged 85, reportedly made hundreds of predictions in her 50-year career.According to Vanga, Europe will “cease to exist” by the end of next year following the systematic elimination of entire populations, leaving the continent “almost empty”, a “wasteland almost entirely devoid of any form of life”.
The mystic allegedly warned of climate change and the polar ice caps melting as far back as the 1950s.
And her followers believe she predicted the 2004 Boxing Day tsunami after warning of a “huge wave” that would descend on a “big coast, covering people and towns and (causing) everything to disappear under the water”
THE MOST FAMOUS BABA VANGA PROPHECIES TO ‘COME TRUE’
Predicted in the 1950s: Global warming and the 2004 Tsunami.
“Cold regions will become warm … and volcanoes will awaken. A huge wave will cover a big coast covered with people and towns, and everything will disappear beneath the water.”
“Everything will melt, just like ice.”
Predicted in 1989: The September 11, 2001 terrorist attack on New York’s Twin Towers.
“Horror, horror! The American brethren (believed to be a reference to the two ‘brother’ towers) will fall after being attacked by the steel birds (thought to be the two hijacked passenger planes). “The wolves will be howling in a bush (believed to be a reference to then US president George Bush) and innocent blood will gush.”
Predicted in 1980: The sinking of Russian nuclear submarine the Kursk in 2000.
It saw the crew die horrible deaths over several days while international rescue crews tried in vain to retrieve the vessel from the depths of the ocean. Until the tragedy, people assumed the “Kursk” Vanga referred to was the Russian city the Kursk was named for.
“At the turn of the century, in August of 1999 or 2000, Kursk will be covered with water, and the whole world will be weeping over it.”
The election of Barack Obama.
Vanga reportedly correctly predicted that the 44th president of the United States would be African American. However, she also stated that he would be the “last US president”. We’ll have to wait and see how that pans out.
Posted by Ogugua Obidike at 14:15